Odds are, if you’re going to Europe, you’re going for the history. Pompei is a history goldmine. For us, Pompei was our fourth stop. We arrived after wining and hiking (and wining some more) in Cinque Terre’s Corniglia. It was going to be a tall task to top it, and turns out, Pompei didn’t come close, but that’s okay! You don’t go to Pompei for the relaxation, or to get away from it all – you go for the history! Within the city itself lies the ancient ruins of Pompeii (note the two “i’s”) – an ancient Roman city whose citizens lived luxurious, pampered, and alarmingly sexual lives. Oh, and there’s a fucking active volcano here. Let’s dive in, but before that, let’s review:

Pompei = City and commune in the metropolitan city of Naples

A statue stares out at the range surrounding Pompeii.

We had three full days to spend in Pompei, and our plate was full. No different than our other stops, we booked an AirBnb in the heart of town. Our host was Serena, and although we did not get the chance to physically meet her, she was by far the most accommodating of our hosts. She helped us book trains and travel for nearly all our Italian destinations, and her pal Alfonso even picked us up from Napoli Centrale. This sounds sketchy, but it turned out to be quite the opposite. It was immediately apparent he was not a crazed axe murderer – he was just a life-loving guy with a passion for his city. On our way to the Airbnb, he stopped at a local shop and ordered fresh mozzarella for us – which was such a life-altering, beautiful moment that I was immediately saddened I would rarely, if ever, get to experience such a thing ever again.

You can’t buy it like this in the US, folks.

The Ruins of Pompeii

In an effort to combat this unexpected depression, we opted to fight fire with fire and visit the Pompeii ruins the afternoon we arrived. After Alfonso left from getting us situated at the apartment, Cate and I hopped outside to walk there. From Serena’s Airbnb, the ruins are a mere 15 minute walk away. Pompei is a bustling town, and locals stand beside their storefronts desperately inquiring you to buy their things. Fair-skinned and blonde, Cate and I were remarkably American and thus ideal targets for the store workers. Be prepared to say “no thanks” plenty of times. An interesting tactic some of the tour stop workers would employ is asking us if we’re going to Pompeii, and then telling us we’re going the wrong way. Don’t worry – you’re going the right way, they just want you to buy into their tours. Another thing – please do not get frustrated with this – it’s their well-being!

Once inside the confines of the ruins, you’re immediately hit with the realization that you’re deeply immersed in one of the most historical areas in the world. Excavations are still taking place, and efforts to immortalize the ruins are ongoing. As you venture inward, the understanding of how great a place this once was will hit you. Pompeii, and most of the Roman Empire, was vastly ahead of its time. Technology like running water and warm, community baths will amaze you, and the artistic creations, whether decorative or architectural, will overwhelm you. Then you will realize this entire place was completely buried when Mount Vesuvius blew its top in 79 AD. There are casts of Pompeii’s citizens on display here – people covering their faces and protecting their children – you will also see the casts of dogs, as well. It’s all quite morbid and sad, really, but it’s humbling to observe. The most fascinating of it all is while you wander through the ruins, you will run into ancient depictions of Vesuvius, and you will notice the top goes to a point, rather than the flat-top it shows today. For me, this illustrated the magnitude of Vesuvius’ eruption – it literally blew its top off – encasing Pompeii and its citizens in thick ash for hundreds of years.

History is terrifying, but it’s important. We reflected over pizza and wine.

Volcanoes, man. They’re kind of a like a highway to Earth’s core. Occasionally, the Earth gets aggravated and spews its wrath in a demonstration of monstrous power. As mentioned above, Vesuvius had one such eruption in 79 AD, and it did its best to completely erase a once thriving town. If you’re in Pompei, you owe it to yourself to check it out.

We walked the same route we took to the ruins, and the same gal told us we were going the wrong way. NICE TRY. The shuttles to Vesuvius pick you up at Pompei Scavi train station. From there, you start heading up to the rim. About halfway, you stop for a moment and switch into a vehicle better suited for the terrain awaiting you on the journey ahead. It looks like this:

If you have any tendency to be susceptible to motion sickness, I recommend bringing along some dramamine or rocking some seabands. It’s a bumpy ride. After about 15 or 20 minutes, the bus drops you off, and leaves you with a 15 minute hike to the top. As with any hike, always remember to take your eyes off the ground every once in a while. From up here, you see the cities surrounding Vesuvius spread out around you. In the distance, you can see the Isle of Capri fighting the fog to meet your eyes. You see Pompeii, and you begin to fathom the magnitude of the infamous eruption. Once you reach the rim, you can peer into Vesuvius’ top. It’s covered in gravel, but steam still seeps out in some areas. To be honest, it’s alarmingly ominous, but you’ll notice there are sensors everywhere monitoring Vesuvius’ state, so any eruption can (theoretically) be predicted. Taking in the views around you, you realize that such an activity would pair beautifully with some wine. Conveniently, there’s some for sale up there, and it’s as intoxicating as it is affordable (very). Don’t overdo it though – you’ve got the commute back down to endure.

Join us on a journey to Mt. Vesuvius and other Pompei hot spots – link in our bio 🧀🇮🇹

That night, we enjoyed some pasta and pesto, and cheap wine. The European Soccer Championships were on, and Italy was playing. I had always known that soccer was huge in Europe, but when Italy won that night, Pompei sounded like a war zone. I became a soccer fan that night. 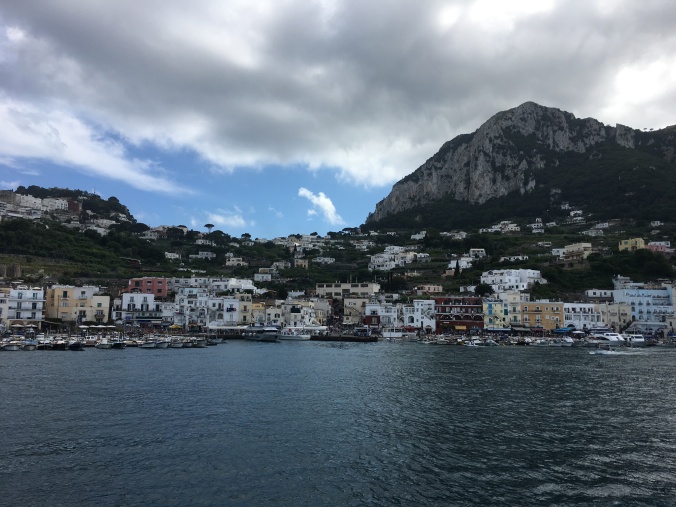 On our final full day, we wanted nothing more than to have caprese on Capri, so we did just that. We took some rickety trains, and then a ferry across the Mediterranean to Capri. The sights were breathtaking, and the island became more beautiful as we inched closer. A bustling port greeted us as houses overlooked the bay. The first bit of depressing news hit when we discovered that the Blue Grotto was closed due to the tide. This is one of the primary attractions on the island, so we were left to explore and find Cate her caprese salad.

Before moving on, I need to admit something. The lack of the Blue Grotto, and the outrageously expensive, forgettable merchandise started getting to me. I got wrapped up in the disappointment and failed to absorb the world around me there. If you sense this happening to you, do everything in your power to stop it, or else you’ll end up feeling good about telling people Capri is “kinda like a floating Bonner Springs luxury outlet mall,” – which it most certainly is not. 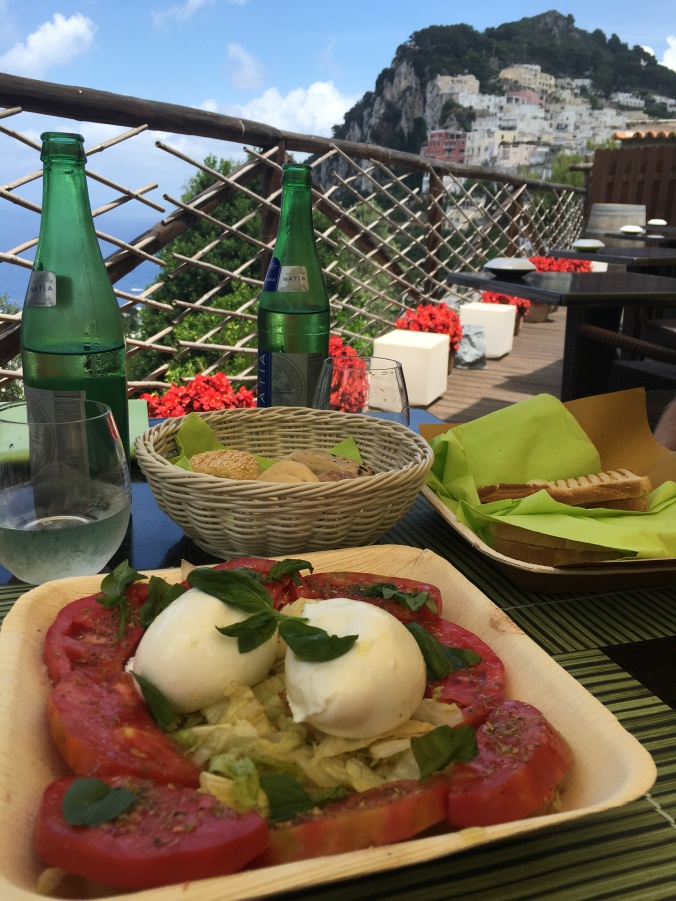 Anyway, Cate and I found a nice spot with Caprese on the menu. It was well enjoyed, and after a bit more exploring, we took the ferry back to Pompei and the rickety train back to our Airbnb. I would like to go back some time to get a more adequate serving of Capri.

Our final day in Pompei came to a close. 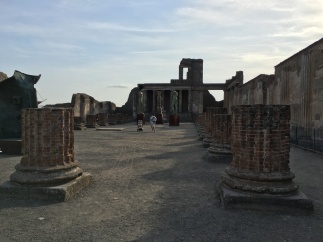 4 thoughts on “Pompei and Pompeii. Let’s learn the difference. Together.”