Ahoy, mateys! Greetings from my couch! Some of you may have heard about our overseas travels earlier this month. Well, the rumors are true, it happened. It was LEGIT. While pondering the last week or so about how to ‘blog about it,’ we were truly having a difficult time. As entertaining as it would have been to type out all of our journal entries from our trip, that would be personal, time consuming, and downright annoying. SO, being the cheese-minded person I am, I decided to compare each stop on our trip with a different type of cheese. Can you believe it? I can. We do plan on posting about each site with tips later (STAY TUNED!), but for now… let’s get cheesy… 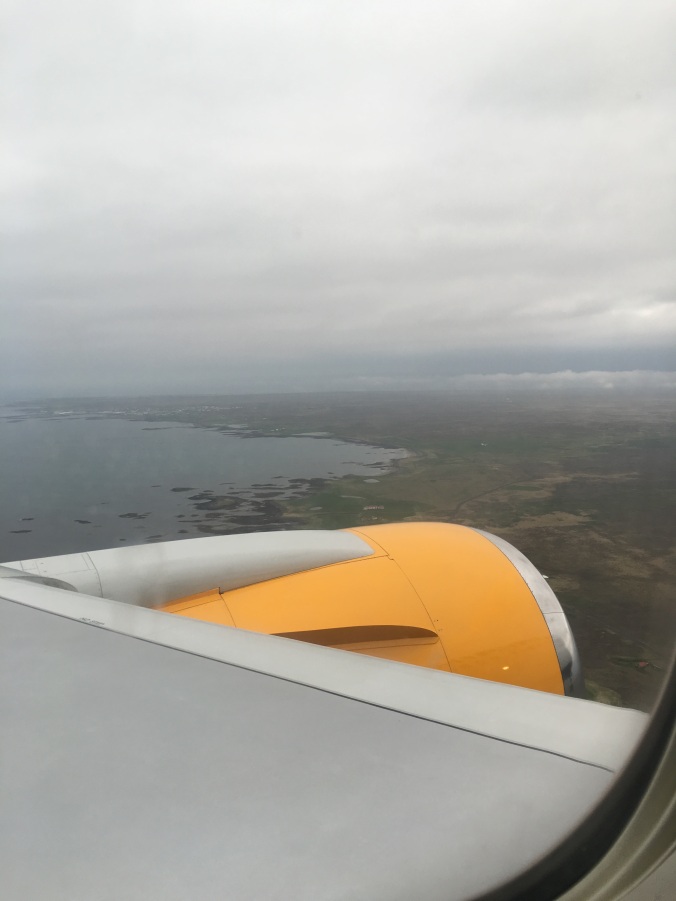 Brought to you by Weston’s own Green Dirt Farm, the Prairie Tomme is a great representation of the Iceland Airport. Never would I have thought to make Iceland a travel destination, but it is on my list now. Never would I want to take a chance on an ‘earthy sheep cheese,’ but bring it on. Iceland, like Prairie Tomme, is full of nature’s beauties. Mother nature does her craft, and we humans need to respect that craft and not interfere too much.

Munich, Germany is FULL of history, people of all kinds, and beautiful sights. I chose to compare the beautiful city of München with Parmigiano-Reggiano because it is a tough city, and very important to the world we see today. In 1936, just outside of the Marienplatz, where a toy museum now stands, Kristallnacht took place. The beginning of the Nazi party, which eventually led to World War II, started 10 minutes from our AirBnB. SAY WHAT. We walked where that asshole HITLER WALKED?! Completely surreal. What a sicko. Parmigiano-Reggiano, or Parmesan, is a classic taste. It is an important cheese. Can you imagine pizza without parm? Pasta without parm? PARM WITHOUT PARM!? (Full disclosure, I have been known just to MUNCH ON SOME PARM. Even the fake stuff at a pizza joint.)

During World War II, 8 out of every 10 buildings in Munich were flattened. The people of München decided to rebuild exactly how it was, restoring the history and their roots. Parmesan is a tough cheese. Parmesan is a hard cheese, yet made with skim milk. Munich is tough, but its beautiful buildings make you feel as if you are in a fairytale.

Day trips from Munich are as easy as drinking beer in Munich (WAY TOO EASY). We took a trip out to Garmisch-Partenkirchen to see Germany’s highest point, the Zugspitze. From the top of Zugspitze, you can see the Alps of Switzerland, Austria, and Italy. We took another day trip to Salzburg, Austria. The homeland to Mozart and the Sound of Music. The trains are easy to use and a great way to see more of the land, so long as you can ignore the French couple FRENCHING THE ENTIRE RIDE TO GARMISCH (eye roll). Parmesan is like Munich in the fact that it goes with (to) everything (everywhere). Now don’t be one of those buttheads that’s all, “Yeah, it doesn’t go with, like, chocolate cookies, CATE.” My response, “Don’t knock it til you try it, yo.”

Energetic, quick, simple, and home of my first French Dog.

We were only in Milan for about 15 hours, but what we saw was beautiful! After spending far too long to find bus tickets (hint: anywhere you see a T outside, you can get a bus ticket), we reached Mila from Milan at our AirBnB. We grabbed a quick pizza dinner (duh) and headed back to shower and sleep!

Milan is like Feta because if it is your jam, IT IS YOUR JAM. Feta looks good, just like the fashion capitol of the world, and is a pretty straightforward cheese. You get what you get with Milan, and with Feta.

Cinque Terre. Where can I even begin? It. Was. Enchanted. Cinque Terre has the perfect combination of history, food, ocean, and hiking. Why did I pair it with Mozzarella di Bufala? BECAUSE THEY ARE BOTH MAGICAL AND I WONDER IF THEY ARE BOTH EVEN A REAL THING BECAUSE FEELING/TASTING/SEEING SOMETHING THAT GOOD CAN’T BE HEALTHY. Here is a lil’ background on Cinque Terre…

Cinque Terre (“Five Lands”) is a collection of five towns off the northwestern coast of Italy. From north to south, there is Monterosso al Mare, Vernazza, Corniglia (our homebase), Manarola, and Riomaggiore. Like I mentioned earlier, we will go into more depth of all of the locations we visited, but all you need to know about Cinque Terre is that it is known for their white wine, lemons, anchovies, and DOPE VIEWS. Each of the five towns has its own ‘thang’ whether it be a beach, a castle, or a “feel”. There are trails and trains that connect the five towns, with ma and pa restaurants, wine bars, and shops.

The first time I had a true fresh ball of Mozzarella di Bufala was actually in Pompeii, but the moment it hit my lips, I knew it was the most beautiful cheese I had ever eaten. Made from the milk of a water buffalo, this cheese is not only sweet and soft, it is nutritious with only 21% fat. Easily digestible AND delicious? SERIOUSLY, HOW DO YOU EVEN EXIST?!

Girl you old, but you fine.

When you hear the word ‘Pompeii,’ you probably think of the ruins from the infamous Mt. Vesuvius. We did too. The ruins were absurdly amazing, and yet very chilling. I didn’t realize the SIZE of the town. It was a legit small town with streets, gutters, and community baths. Mount Vesuvius was phenomenal and ALSO fairly chilling. The steam vents were still steaming and it took me a while to realize I WAS ON THE TOP OF A FREAKING VOLCANO. I still can’t really believe I was there.

I chose to compare the city of Pompeii with the Bleu de Chévre because… it isn’t for everyone. Bleu de Chévre is made from goat’s milk, while most bleus are made of cow’s milk. The goat’s milk is then mixed with the starter penicillin culture. The magic happens, and you’ve got Bleu de Chévre. Goat cheese is hit or miss with some people, as is bleu cheese. Pompei was beautiful, seeing the sights, but the city itself was not for us. It was busy, dirty, and naggy (referring to the tourist companies and restaurateurs pestering for our attention). Once we saw it, we got our fill. Once you try Bleu de Chévre, you’ll get your fill and, chances are, you won’t need to go back to get more. 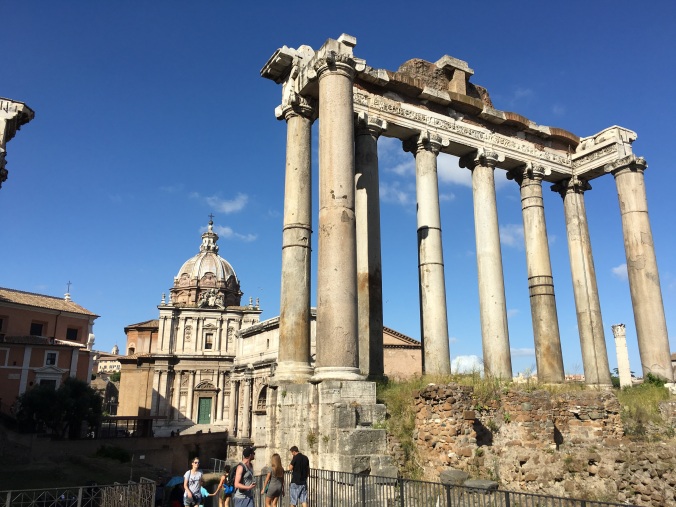 RoMAN, you are cool.

Rome was fantastic. While touristy, there were so many things to do, you never felt overwhelmed by the magnitude of the city’s sights. We stayed down the street from the Colosseum, right in the heart of the history. There is ALWAYS something to do in Rome, something to see, something to eat, you name it. Rome is the birth of so many present day ideas such as concrete, water systems, and SPORTING ARENAS. One other little possible unknown fact is that cheddar cheese MAY have started in ROMA, ITALIA?! SAY WHAT!?

Cheddar cheese has been traced back to the Romans, but it was not yet named ‘cheddar’ until the 16th century in Somerset, England. Cheddar cheese is the real deal. It is the basic. If you ain’t lactose intolerant, you most likely enjoy cheddar cheese. Everyone loves cheddar cheese, It is a STAPLE ITEM IN EVERY FRIDGE. Think of all of the renditions of cheddar cheese.. Just think about them. Sharp Cheddar, Blueberry Cheddar, Bacon Cheddar, Garlic Cheddar, SRIRACHA CHEDDAR (WHAT). They all stem from the beautiful masterpiece that is cheddar cheese. Without cheddar, without Rome, we wouldn’t have a lot of the things we have today.

So that’s that. Stay tuned for more details about each locations, our do’s and don’ts, and our eats and don’t eats.